Zoo U, a social and emotional learning game developed by 3C Institute, is featured in a Newsweek article on stands this week about the rise of the “gaming for good” movement. The article includes interviews with Dr. Melissa DeRosier, CEO of 3C, and Jessica Berlinski, chief impact 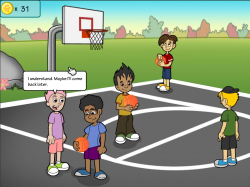 With the help of funding from the U.S. Department of Education, [DeRosier] and her team designed a game that guides kids through the process of becoming virtual zookeepers—and rewards them for cooperating with other characters along the way. How adeptly players navigate social scenes determines how many coins they receive, and at each scene’s close, a nutty professor character named Principal Wild explains what they did well and what they could have done better.

These types of “stealth assessments,” as DeRosier calls them, are built into the game so teachers can make sure players are mastering the material and track each student’s progress. How kids interact with other characters reveals how adept they are at communicating and cooperating. In a scene where a teacher asks your character to run an errand, responding with “How can I help?” garners more points than a surly “What do you want?”

“They took to the cartoon scenes of hallway chats and playground four-square right away, says Gregg Graves, who has used the game with 125 fourth-grade students at North Forest Pines Elementary in Raleigh, North Carolina. “When kids started taking the headsets off, they were saying, ‘Can we do that again?’ and ‘That was kind of like real life.'”

Laura Villegas, a teacher at Oak Ridge Elementary School in Sacramento, California, said her students are learning about the impact of bullying, noting that they don’t like it when in-game bullies lash out at their characters.

Svoboda writes that Graves was impressed with how quickly the game supplied him with a wealth of information on all 125 students’ social acumen. ‘At the end of the day, I had data for my entire grade level and on each individual student,” he says. “I was able to sit down with [the teachers] and explain what it revealed about social skills that kids were struggling with.”

The article also cites the research behind Zoo U: 3C conducted a randomized controlled trial with 7- to 11-year-olds and founds that kids who play Zoo U feel more socially confident, behave less aggressively, and are better able to regulate their emotions.

The game is being tested in multiple school pilots across the country in preparation for launches in many more districts by 2017.

Zoo U is available for purchase through Personalized Learning Games.